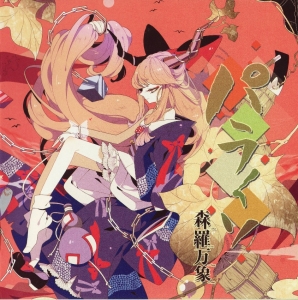 Update [24/01/2015]: It seems as though the structure of this track is based on the Arctic Monkeys’ “When the Sun Goes Down.” Parody tracks aren’t a new thing to Shinra-Bansho’s albums – ‘Corpse Dance’ is based heavily off Brittany Spears’ “Toxic.” Thanks to Tegamin for the tip!

Another track from Paraiso. This one has surprisingly dark lyrics, especially since the beginning and end sound so… hopeful. I wasn’t able to decipher the meaning of ’14,’ though I guess it could be seen as a metaphor for death, since Japanese people are quite superstitious towards the number 4 in general. 4 (shi) is read the same way as ‘death’ (shi), so Japanese people tend to avoid saying it. They even invented another way of saying 4 – ‘yon’ – to combat it… It is possible to pronounce 14 as ‘ishi,’ though, which is part of Koishi’s name.

As another note, some of the verses are hard to translate, since they use the negative verbs ‘くだらない’ (kudaranai) – ‘worthless’ and ‘つまらない’ (tsumaranai) – ‘boring’ alongside the (surprisingly) non-existent ‘positive’ verbs ‘くだる’ (kudaru) and ‘つまる’ (tsumaru). If you want to find out more, I’m sure there are plenty of pages on this contradiction out there.

Like a chick that’s just been born,
I still blindly believe in this world.
Even though I can’t choose the path I follow,
From me, to you,
I send a message that advances to… 14.

As for the boring things,
Stuff I don’t want to do, things that can’t be helped.
“Do too much” or “Do nothing at all…”
In that case, “nothing” is more comfortable, you know.

The destination I chose, from the bottom of my heart,
Was it with my own will? Whose will was it?
Beyond the point I’m bound for,
‘14’ is waiting for me…

I turn those poetic pages, singing lies, singing truth,
And the paragraph of I, who am so mischievous, undergoes a shift…

There, right behind me…
Who’s there? What’s there?
I turned my head, and
I was there, smiling.

I cling to an ego that I cannot sustain, smiling, believing that I am happy.
The beautiful butterflies flutter and dance: it’s such a world…

Beginnings are found beyond endings. I forget even my own ego…
As I lose the meaning of my life as well,
I wonder if my paragraph will be lost, too…

Like a chick, dead in pursuit of one it loves,
The world still foolishly advances forward.
Even though we can’t choose the path we follow,
Let’s head towards the end,
Towards ’14,’ reserved only for me.