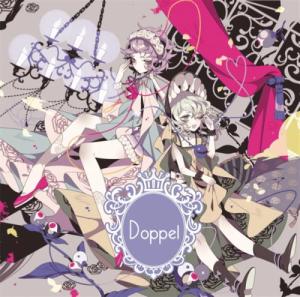 And here we are, at the last track of the album. Lyrics-wise, I’d say this is probably the pinnacle of the entire album. Beautiful images, references to ancient mythology… this track has it all. As a whole, it seems like this song dually refers to Tenshi’s journey through the aurora as well as traditional purification rituals known as ‘misogi’ (禊) and ‘ooharai’ (大祓).

If I added in translation notes for every single reference, I’d probably end up with over 10 notes, which is a bit too many! Instead, I decided to focus on the main points, like the names of deities and stuff like that. And as a final note, the role of the speaker appears to alternate between God and Tenshi.

In a world that had lost its prayers, there were people who had been entrusted with them.
A blade smouldered inside the aurora. The one who had not yet grasped it stood still, without calling upon it.
(I am the eye. I am the heart. I knew that here it was not yet so.)

The child who fell from the heavens became a cornerstone – a halo, who was inspired to set off.
I wonder who wished for it. Nobody will ever know…

O, multitude of spirits, who soar through the sky… (in a dry vessel)
A blade pierces through those overcast words.
Yes, I heard that this place was paradise.
Everything is as the will of the Lord decrees. (Come, sing!)

Under the divine protection of the wind, which causes the greenery to bud, that sword of someday has finished rusting.
(Still, the wind blows, for the sake of carrying the life of the flowers.)
O, to be bound by the thread of Shangri-la!
Now, I yearn for the weight of the sky in this place, as it grows dark.
(Until that day, this sky grows dark.)

(Purify my soul! Cleanse my soul! This body, this voice – purify them!
Such a beautiful, sorrowful voice. I wonder what is reflected in those eyes…)

Without completely casting away her nostalgia, the maiden made her way towards that vast land,
Just as if she was recalling those days of yore.

That vast land sighs. It echoes through the rivers. Aah, the murmuring of the silent ocean…
(The beauty of that melody withered and faded. The Puranas shine faintly; they have not yet faded.) (1)
The prayers become flames, and race through the mountain.

As the voices of people seeking salvation echoed eternally through the fire bell,
(Not yet forgotten, inside the heart, for eternity.)
A scarlet blade was in the hands of that maiden, who walked upon a path contrary to the tailwind.
(Exchanged into life. Nobody can be allowed to die yet.)

The aurora is steeped in scarlet. That maiden’s ‘id’ is that which shines.
Perhaps it guides the backward path…
I, who am surrounded by mist, am the eye. I think of Mother Earth.
(Yet, I myself am present in the world—)

The wind carries the smell of ivy, and the sounds of the spirit-scattering sword when it is swung.
But from the grieving Dia flows the Mana of forgotten life. (2)
(Love, and voices, and this song, are still beloved.)
My feelings of nostalgia grow stronger, aimed towards my birthplace at the furthest ends.
(The wind and the earth are living…)
Today, she shall continue to sing. The maiden’s hopes become nourishment – they shall save all.
(A downpour. Aah, save everything!)

The morning haze, the evening haze: o, please save everything!
Riding upon Odr, as the clouds fall, the shrine maiden of the heavens shall save all creation! (3)

(1) The ‘Puranas’ are ancient Hindu texts, written in Sanskrit. The word ‘Purana’ by itself means ‘old.’
(2) Dia is most likely a reference to the Roman goddess of the fields and the earth. She is represented in the lyrics as ‘大地’ (‘daichi’ – earth). Mana, written as 水 (‘mizu’ – water) in the lyrics, generally refers to the power of nature’s elemental forces.
(3) Odr is a Norse god, and he’s the husband of Freya. Apart from that, he’s relatively unknown and he’s presented as a passive figure.