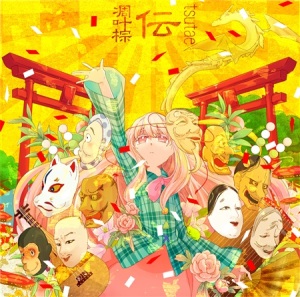 I’ve been waiting for this arrangement my whole life and I didn’t even realise it.

Well, that’s a bit of an exaggeration, but still – this is definitely my favourite arrangement of this particular theme. It’s so lively, and Merami does some great ‘character’ singing.

I feel like this song is about Suwako, who gradually gets more and more jaded after being beaten by Kanako. Even the humans who give her faith say one name while also saying another. They betray her, commit acts of violence against her, and are generally ungrateful of what she does for them. In the end, she just gives up and curses everything. That’s a bit of a shallow reading, but there’s a lot to get out of this song. Some very evocative phrases, too, so I hope you enjoy it!

A side note: according to good old Wikipedia, the second play in a traditional Noh performance involves a famous samurai pleading for salvation, culminating with a re-enactment of their death. I feel like the other plays in this album fit the original format a bit better, but it’s also possible to fit this track in as well.

And across all the land,
I step upon rust-coloured soil.

If losing and winning is the way of the world,
Then there’s no option but to obey.

But with this infinite malice…
Will things be allowed to end like this?

The sky glows a brilliant red,
And the ears of rice lower their heads heavily.
But there is no trace of a saviour
At the edge of the lordless land.

I walk upon the loser’s path!

To those who walk upon the mountain of corpses,
One or two steps alone is not enough.
Without being allowed to go forwards or backwards,
They walk the road of carnage, never to return.

Walk upon the victor’s path!
…It’s endless. How long does it last?

I govern the best patch of land. Like that, take everything and go!

The world is ever-changing.
You are abandoned by the gods, and you are saved by them. (2)

I pray that my people will survive using the outsiders’ hands.

Even so, are you aware
Of whom your violence is aimed towards?

I will never forget it.

The same mouth calls out different names.
Felicitous bonds are empty.
No matter how sunny yesterday was,
They are ignorant of how tomorrow will turn out.

This is the loser’s road!

Because those who are protected are weak,
Always live in the shadow of someone stronger!
Whose sake are these prayers for?
How absurd. Nobody knows.

Will they reach the victors?
…How long will it take? How long?

All the faith I had bundled together… I threw it all away, just like that.

The world is ever-changing.
You are abandoned by the people, and you are saved by them. (3)

I pray that my people will survive in the outsiders’ arms.

Even so, are you aware
Of whom your ingratitude is aimed towards?

I will never forget it.

They sicken others and populate to a calamitous extent
Without growing even a blade of grass.
What sort of resolve does it take
To appease the impurity I gathered up?

The world is ever-changing.
There is no world to abandon you, no heaven to save you.

I pray for the lives of the outsiders.

Live and repent
So destruction will never come to pass.

(1) The characters representing ‘heavens’ and ‘earth’ in these two stanzas (乾 and 坤) come together to make the word 乾坤 (‘kenkon’ – heaven and earth / universe).
(2) This is an old proverb that, in general, means ‘when one door shuts, another door opens.’ It reappears in increasingly corrupted forms thoughout the song.
(3) 神 (‘kami’ – god) is replaced with 民 (‘tami’ – nation/people) here, but ‘kami’ is still sung.