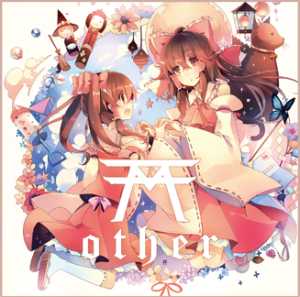 I wonder if this track is related to Aquaterrarium, the other track which features an arrangement of Patchouli’s theme…? Either way, azuki’s lyrics are as vaguely insightful as ever. I say this every time, but translating his lyrics is like eating a hearty meal. It has an almost physical effect.

Some words are sung differently to how they’re written, but I couldn’t quite make them out, so I stuck to what was written.

“I know everything.” But thinking it wasn’t enough, I went too far.
I made a wall out of a mountain of books. It was my world.

I searched. I learned. I read and threw books away. I did these things over and over.
Now, I’ll decipher it! It’s a QED beyond proof.

Yes! Hereditary or acquired? Even if the boundary between them disappears, I won’t mind.
I write on, scratch, chip, and bundle up the white sky.

Tonight, I’m drenched in moonlight once more. I light a fire, and even if I keep wheezing,
Only clowns or poets deceive and smile.

Ah… I’m burdened with an eternal bond, and even its promises were false.
I want to hold warmth close to me…

“I hate you.” I said those words, and through just that, I knew it was over.
The riffraff will keep dreaming, won’t they? Let them continue to hesitate.

And so, to conceal my faults, which I could neither compensate for or comprehend,
I sought someone. The hand I stretched out seemed impure…

Though I was selfish, though I cried,
I’ll become a bird and look at the sky in my paranoia.
I bloom, cut, and cleave, playing a cruel antithesis.

I’m drunk on water tonight. I rot away, unable to stop sobbing.
Only foolish authors hate treachery.
Ah… Even my hopes are traps from angels. I bear equivalent karma
And fragments of the future were made known.

Everyone goes far away, as if they fear the Almighty
But if you turn God’s miracles inside-out, they become sins.
Eternal flames burn my body, and I etch them into my heart.

Tonight, I consume golden soil and vomit up curses.
Even my soul is perplexed. I am in a cage: a ‘locked girl.’ (1)

Ah… if you call even pain proof that you’re alive
Then, yes – I’ll throw away the sun for you!

(1) ‘Locked girl’ appears in the booklet as ‘a girl who locked her heart.’ [心に鍵を掛けた少女]