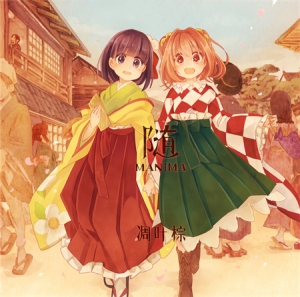 I thought this track would be related to 葬迎 from Hohuri since they sound so similar, but I was wrong.

Instead, this track is based on chapters 38 and 39 of Forbidden Scrollery, in which ordinary objects brought to life (the tsukumogami) speak and defame Aya’s newspaper. Reimu talks to a broom, which is one of the highlights. So, even though the song uses Mamizou’s theme, it looks like it’s really about the tsukumogami, which themselves represent social media. It’s surprisingly relevant to today’s society!

There are a few Diao ye zongisms in there, but I also added in a few translation notes to explain some communication-related sayings. There are three instances where RD replaces whole sentences with the word ‘grasshoppers.’ I tried blending both the written and spoken parts, but the end result was a bit too long, so I left the written sections as translation notes.

As for the title, I think locusts are a type of grasshopper, and we all know how they operate. They go through fields and eat everything, leaving not a scrap of vegetation behind. In that sense, the ‘grasshoppers’ are probably the tsukumogami [social media] devouring Aya’s newspaper [traditional print media]. This song is kind of like ‘The Anonymous‘ then, isn’t it?

The walls have ears.
The doors have eyes.

If so… I suppose even brooms can talk.

As far as the eye can see,
Saying this and that,
Everyone goes into detail about all their complaints.

By the way, did you hear
About what happened to that broom’s master…?
Of course that vase was nothing special.
You could even say they were tricked, though they were the only one in the dark.

…Night by night, words that can never be heard are exchanged.
But somehow… we notice them!

Words and phrases swarm about
And the truth is… that’s right! Everyone’s watching, watching from somewhere.
The grasshoppers stand guard. (1)

They’ll expose trauma that hasn’t vanished even after 75 days… Ah!

…Be careful around them.

…Don’t be fooled by them

…They must be suspicious!

…Are they those tanuki from all the rumours? (2)

The walls have ears.
The doors have eyes.

If so… how about if the buckets speak?

Having said that, what will happen if you’re found out?
So keep things quiet, keep things secret
And keep spreading your protective lullaby. (3)

By the way, did you hear
About what happened to that bucket’s boss?
They were prey for the headless horse or something
But by now the truth has been consigned to oblivion.

…Night by night, words that must never be circulated are exchanged.
But we’re going to deliver them to someone!

Sing, celebrate, and call out, o sparks of life!
The doors speak from the moment words enter their mouths. (4)

Words and phrases swarm together
And the truth is… That’s right! Everyone’s listening and straining their ears.
The grasshoppers’ sights are set. (5)

Were you bewitched by a kitsune?
Were you enchanted by a tanuki?
Words are all that can be heard
And so, they spread. Ah…

Thus, a small, small voice
Echoes and grows louder
And then everyone, ‘somehow,’ knows!

Now, clamour, rustle, and make merry, o sparks of life!
Beneath the rooftop moon, give life to idle gossip. (6)

Words and phrases swarm together
And the truth is… That’s right! They’re still watching, always watching.
They themselves are grasshoppers. (7)

(1) 闇に潜む密偵の如く (‘just like spies lurking in the darkness’) is written, but ‘grasshoppers’ is sung.

(3) The bundle of kanji that make up this line (桑原始終散子守歌) do not appear to form a cohesive word, but instead can be split up to form 4 separate parts: 桑原 (mulberry/a chant used to prevent bad things from happening), 始終 (continuously), 散 (scatter), 子守歌 (lullaby). This informs the loose English interpretation of the line.

(4) This line is linked to the proverb 人の口に戸は立てられぬ, which literally means ‘no doors can stop people’s mouths.’

(5) 混沌に惑わす伏兵の如く (‘just like soldiers, chaotic bewilders lying in wait’) is written, but ‘grasshoppers’ is sung.

(6) This line is linked to 井戸端会議 (idobata kaigi), used to refer to the gossip that took place among women as they washed clothes or drew water by a village’s well.

(7) 監視社会に蔓延する情報の如く (‘just like news infesting the surveillance society’) is written, but ‘grasshoppers’ is sung.